The concept of “Position University” is often thrown around during the NFL draft when a particular college has several players of the same position break into the league over a short span. However, I think a deeper look at the draft may reveal some other interesting things about what colleges may be able to truly make the claim they are “WR U” or “QB U” or whatever.

In this, the third chapter of Position University, we will pick the school – or schools – that have produced the best, most productive, and most impressive Wide Receivers. Like before, we’ll restrict the study to drafts since 1990, however that will still leave an enormous number of players to consider. Since the Cowboys selected Alexander Wright from Auburn in the 2nd round of the ’90 draft a whopping 1,028 WRs have heard their name from the podium. 215 different universities are represented with 132 of those producing at least 2 draftees. Keep in mind, players often do change positions after being drafted, in those cases if a player was a WR at the time of the draft they’re considered in the initial count. Then after being drafted, at least one target or carry qualifies then for a “year” in the longevity discussion. Converting to TE, like Central Missouri St. standout Delanie Walker, or RB, like Stanford alum Ty Montgomery, does not exclude a player from the study. QB converts such as Ohio St.’s Braxton Miller or Alabama-Birmingham’s Joe Webb also count.

A few novelties first. The greatest one-hit-wonder is Central Michigan’s Antonio Brown. He was selected in the 6th Round in 2010 and personally accounts for one-eighth of the 152 6th Round picks’ receiving yards since 1990. The only number one overall came from perennial Pac-12 power USC. Keyshawn Johnson was selected by the Jets with the first pick in 1996. Over his 11-year, 4-team career, Keyshawn was a superstar and headlined what was probably the greatest single WR draft in history. Other significant names include Syracuse’s Marvin Harrison, Tennessee-Chattanooga star Terrell Owens, and Michigan St. Spartan Muhsin Muhammad. Ten names in all ended up with 7000+ career yards from ’96, no other draft had more than six.

The 1st round is where great WRs come from. Despite accounting for only 11% of the total picks, 1st rounders have accrued 30% of the stats and 20% of the years of production. 53 different schools have graduated 1st round WRs with 13 producing 3 or more. The 1st round is not completely free of busts however, excluding the last 3 drafts, 12 different 1st round picks have failed to survive three years in the league. The worst 1st round pick is probably Oklahoma St product Rashaun Woods who went 31st overall to the 49ers in 2004 but only managed 7 catches for 160 yards and a lone TD in his 14 game career.

Seven schools have produced 20+ WRs since 1990. Ohio St. and Florida with 28 each lead the pack followed by Miami (FL) with 26, USC with 25, LSU and FSU with 24, and Tennessee with 22. The first five plus Michigan are the only six schools whose WR draftees compiled 100+ years in the league. Tennesse is one year short with four active Vols making 100 look almost guaranteed for them next year as well. 13 schools’ WRs have accrued 30,000+ receiving yards but only 4 can boast of over 50,000. Those 4 schools check off each the criteria mentioned here with 20+ picks, 100+ years, and 50,000 yards making them the key contestants for WR U – Ohio St, Miami (FL), LSU, and USC.

We’d already discussed the Trojan’s star pupil, Mr. Number One, Keyshawn Johnson. He leads a strong group including a pair of 8000-yard men Curtis Conway and Johnnie Morton and active studs Robert Woods and JuJu Smith-Schuster. There are certainly a few busts/disappointments scattered in there as well, none more painful than Detroit’s ’05 pick Mike Williams. Also of note, five different times the Trojans saw a pair of WRs selected in the same draft.

The Bayou Bengals have a more evenly distributed selection of standout performers. No LSU alum has hit the 10,000-yard mark yet but five have over 5,000 and Landry and Beckham seem destined for many more. Craig Davis easily the most disappointing early selection of the bunch but injuries prevented him from establishing himself.

RB U (Miami), if you recall, also has a strong claim on the WR title as well. The 2001 draft in particular produced a pair of 10,000-yard men in Santana Moss and Reggie Wayne and then two years later the Houston Texans great Andre Johnson added a third. However, those three giants stand well above the rest of the list which is littered with busts such as Yatil Green, Sinorice Moss, and Jammi German.

Ohio State boasts the most active WRs with a whopping 9 (Clemson – 7, Notre Dame, Georgia, Mississippi – 6) along with the most total years (141) and total receiving yards (69,715) since 1990. Joey Galloway, 1st rounder in 1995, is their top yardage man while five others have 5,000+ in their careers. Michael Thomas is a consensus top-3 WR right now and would seem to be a slam dunk to overtake Galloway for the OSU yardage mark later this decade. Even the mighty Buckeyes have a few busts including current Free Agent Devin Smith, ’09 2nd rounder Brian Robiskie, and ’07 1st rounder Anthony Gonzalez. 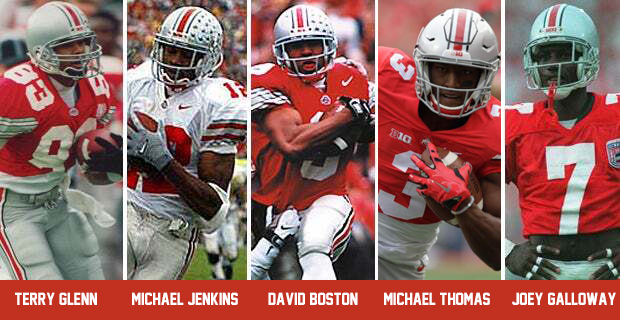 Many more schools have decent claims, Michigan, Notre Dame, Oklahoma, and more recently Mississippi and Clemson, however, I think the answer is Ohio State. So what do you think? Do the Buckeyes deserve the title WR U? Let me know in the comments below and keep your eyes on AEE.com for all your sports and entertainment needs.